Skip to content
I don’t know if any of you who drop by here follow me on Gab. Gab is where I generally do short form commenting and, as it’s come to be called, shitposting
It’s a weakness.
One line I use a lot is “They want you dead.” This isn’t original to me. I stole it from someone who would probably rather remain unnamed at this point in history. He has more to lose than I do.
I used it in a message to Mountain Man this morning, and he didn’t follow the meaning. I told him I’d send him the rant later. Then I thought about it, knew that I had been remiss in posting lately (fighting the Migraine Wars leaves little time for much else) and decided to share it with you and just send him a link, driving up my clicks. 🙂
I’m betting my reasons for saying “They want you dead” are different than other folks, but most everyone I’ve seen say it comes from different places, travels different roads and reaches the same destination. I’ll go through how I’ve made the trip.
I’m one who, for most of my life, derided conspiracy theories, and I was pretty quick to label something as a conspiracy theory. Then, the last decade, which culminated in 2020, happened. The other side stopped hiding and came out in the open. My blinders had no choice but to come off. 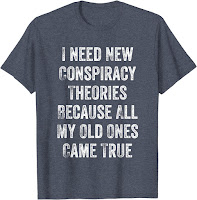 Remember when Ted Turner started buying up huge chunks of the American West? Yeah, now he owns 2 million acres and is the second largest individual land holder in the US. But hey, it’s a business, right?
More recently, Bill Gates became the largest holder of farmland in the US, with 242,000 acres spread across 18 states. Ted is apparently only #4, but he was busy buying up all the ranch land. And by the way, you might want to really read that article and start researching names. You’re going to get an education in what the rich folks are doing with their money these days.
Why are these things important? Because the whole “Great Reset” isn’t a conspiracy theory, it’s a thing. It’s went by other names in years past, like George Bush I’s “New World Order“, but in the end it’s all the same plan. It’s out in the open now because they think they’re so far down the road with it that we can’t stop them, and all it will take is a little marketing to get us to go along without violence. Hey, “You’ll own nothing and you’ll be happy about it!“
I think there’s even more behind the scenes that we haven’t seen yet. Many of these same people have been preaching for years that the planet is over-populated and that we need to drastically reduce the number of humans for a variety or reasons. But we’re not co-operating with that. Many countries, specifically Eastern European ones, aren’t going along with the plan and are pushing for more babies. Liberals, as noted in the uber-liberal UK Guardian, are not amused. How dare we!
Stronger efforts are obviously needed. Still, they don’t want out-right violence, because they’re afraid they will lose. And so comes along Covid-19. No one knows just how this virus got going, but there is continued suspicion that it wasn’t a natural accident. Even the WHO, which seems to be at least partly controlled by Chinese interests, is taking a look into the subject. Probably not the group I’d want, but we little people have to take what we’re given and be happy with the white wash.

Numbers vary from place to place, and many want to call this one of the the deadliest pandemics in history, but so far…no. Besides, who ever heard of a pandemic that needed such a marketing effort to sell people on fearing it? You can’t hit the website of any mainstream media outlet where the Wuflu isn’t at the top of the page. The space aliens could finally land on the White House lawn and they’d be squeezed to page 3.

The pandemic is simply to keep people scared and unresisting for the next stage. Our world economy is on borrowed time. It’s only been a matter of time before it caved in, and Wuflu offers a great opportunity to manage the timing of that event. So we’ve seen massive global spending on efforts to battle the disease, stimulus checks, support for those who have lost everything due to the actions of their own governments and anything else they’ve been able to sell-which is pretty much anything at this point. The amount of money that has been created and is owed is beyond belief. There is no way this money can’t eventually cause massive inflation, and the amount of debt will never be repaid.
The collapse is coming, and probably sooner rather than later. Reset, as it were. A new order emerges from the chaos of collapse, and it won’t matter to most that it’s a neo-feudalist new order. It will offer protection, safety and food. You’ll own nothing, serfs, and you’ll like it. You’ll have a nice hovel, plenty of gruel 3 times a day and all the work you can do. You’ll be alive for as long as you’re useful.
(I have to note I’m taking great pleasure in finding such good writeups of these concepts on Wikipedia. Odd how that is working out.)
No matter how it is stage managed and no matter how many people die from social upheaval, starvation and disease, there will still be plenty left. Probably more than enough to staff the new estates of the global élite, even knowing that all the work will be done by hand and with animal power, because “Carbon BAD!”
So yeah, they want you dead. If you’re old, have a chronic disease, the incorrect political views, live in the wrong place, own a small business, think for yourself or any of a hundred or thousand other reasons, they want you dead. They need you dead. You’re an impediment to their plans. They’re smarter than you-why, they have all the money, and that proves it! So die already.
Obviously, I could be wrong. This could all be a string of coincidences. I could just be seeing monsters under the bed. I may be a paranoid conspiracy theorist myself. But I’m not betting on any of those. It may not happen as the elites expect, and I doubt it will. I expect their  most excellent plan to come apart as it encounters the chaos system that is a collapsing society. They may manage to pull it off in places, but I expect most of their proto-estates to be looted and burned, and they and their acolytes hung from the nearby trees if they’re lucky.
We’ll see, won’t we.

1 thought on “They want you dead”