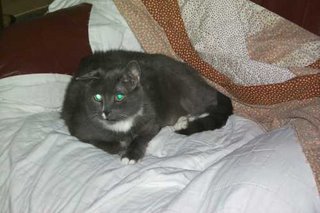 We had to bid goodbye to our Ricky kitty this morning. At nearly 17, he had beaten diabetes and was slowly declining from chronic renal failure. I took him to the vet yesterday after a precipitous drop in his weight. The exam showed an infected mass, possibly cancerous, on his tongue. When I went to pick him and his antibiotics up, he was having problems walking. Given his poor condition and the stress of the trip, the vet and I hoped that a nights rest would perk him up.

It didn’t. This morning, he was worse. We took him to the vet, who had just gotten his bloodwork back. The news was bad–along with the worsening problems relating to kidney failure, the diabetes was back. We discussed the options, which were few. We knew that all we had done for the past two years was so that he could live a good life, not to force him to exist because we were too cowardly to allow him to go–and I wouldn’t allow that effort to turn into something evil and nasty. The euthanization procedure was gently done, and Mrs. Freeholder and I were with him at his last conscious moment.

A short while ago, the entire family finished burying him in the back yard of the new Freehold.

Right now, I’m just sick. Even though I know we did everything we realistically could, I wonder if we could have done more? I don’t think so, but those thoughts seem to keep coming to the fore.

I’m going to go find something useful and brainless to do outside in the warm sun that Ricky will never bask in again.