FOXNews is reporting that a recent photograph: 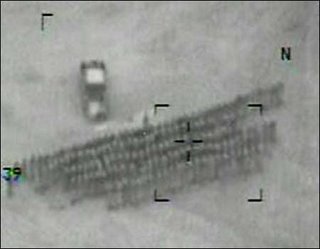 was not authorized for release by the Pentagon. It shows a large number of Taliban gathered for a funeral.

Well, I can’t imagine why the Pentagon wouldn’t want this picture to get out. After all ,we didn’t bomb them–our rules of engagement bars the bombing of cemeteries. Why, this ought to prove to the world what wonderful people we are! (This from the armed forces who bombed Monte Casino abbey into rubble during WW II because it was used as an artillery observation post.)

NBC quoted one Army officer who was involved with the spy mission as saying “we were so excited” that the group had been spotted and was in the sights of a U.S. drone. But the network quoted the officer, who was not identified, as saying that frustration soon set in after the officers realized they couldn’t bomb the funeral under the military’s rules of engagement.

“Frustration soon set in…”. Boy, I bet it did. Let’s hope something “sets in” at the Pentagon as well–preferably some new asses sitting in those plush chairs who can make better decisions.

Cost of a Predator drone: $4.5 million
Cost of a Hellfire missile: $58,000
Cost of missing the opportunity to kill a large group of terrorists with no danger to our own troops: Priceless