Apparently, the process of returning the confiscated firearms of the population of New Orleans isn’t going very well:

“We were told 25 people went in to get their guns and eight left with their firearms,” Wayne LaPierre, Executive Vice President and Chief Executive Officer of the National Rifle Association, said Monday afternoon.

You honestly didn’t expect anything different, did you?

But there is a nugget of humor in the story: 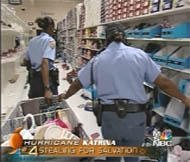 Chief Warren Riley denied on Monday that his officers indulged in mass confiscations after the hurricane. “If we took a gun from you and you were walking down the street, you went to jail,” Riley said. “We took guns that were in homes. We took guns that were stolen that were stashed in alleyways. If we went into an abandoned house and a gun was there, absolutely we took the weapons. Obviously there were looters out there.

Yep, there sure were some looters out there.